I’ve done what I wanted to from last time, I guess? Dialogue boxes are incorporated into Stage Play, and they behave properly and follow actors around, and they work. I think I’m pretty set with this! …unless I want audio.

I also did some more coding logistics stuff and now I can more easily switch scenes. If I ever get to a second scene

This was my main goal for the past two weeks.

I did some research first, since I know pretty much nothing about stage lighting. In the end, I mostly watched a few Youtube videos, and found this one particularly interesting: https://www.learnstagelighting.com/how-do-you-lay-out-your-stage-lighting/

…but quickly ran into a snag, which was that in the forward rendering pipeline in URP, every object can only be lit by up to 8 lights. Which would produce a very limited lighting setup, since the 8 lights would also count the point lights used in explosions, weapon fire, and various glowing objects.

So, I had to make a lighting setup that would work with 8 lights. You can improve upon this limit by baking lights (pre-rendering them and drawing them as a non-moving texture), but this is a stage play. I can’t bake any lights, because lighting changes are like, half the show. The baked lights look pretty interesting, but I wasn’t able to figure out how to make the scene back to full darkness after baking them. Alas. 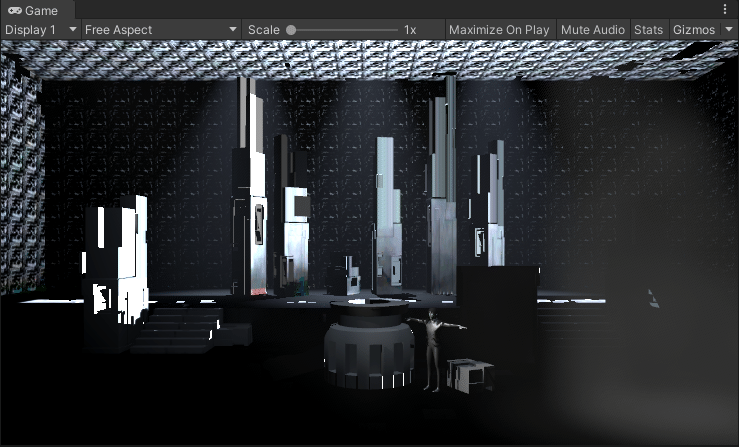 So instead of a full lighting setup, I’ve got only two backlights, two front spotlights, a stage-wide ambient light, and another point light that illuminates the backdrop only. That’s 6, and the other 2 are going to be taken up by various transient lights, like glowing holograms and whatnot.

This is the lighting setup with only the backdrop lights on: 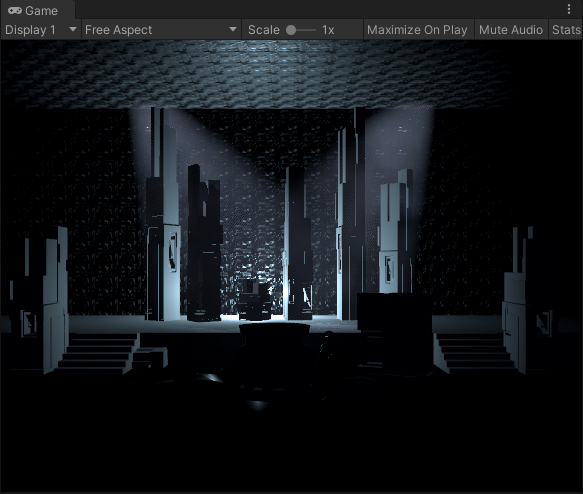 …and this is the setup with the fireplace light (the cyan glow) and the main spotlights: 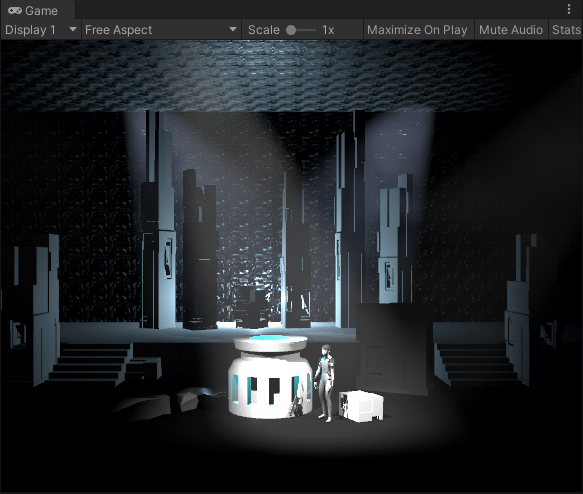 I also still have the mechanism to change light color and intensity while the play is running, so I’ll have to figure out lighting design!

I didn’t figure out animation blending.

I also need some more effects. There’s a bit of a battle in the first scene, and I need to program in MACHINE’s firing effects, and various background explosions. The enemy ‘weapons’ are projected as shadows, and I’ll need to figure out how to render them too. I’ll probably have to fake the shadows, since the lights are kind of fake. As usual, we’ll see.